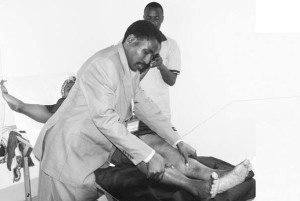 Proficient Goodrich Muteguya was born and raised in Kikagati Insigiro Uganda. He is a Reflexologist, Nutritionist, Herbalist, Gerontologist, a Physical Therapist, Community  Developer and God Fearing Person. He resides at Makerere –Kampala where all his health are located, he is married to Miss Mutesi Florence with Two boys and three Girls. Miss Mutesi Florence is a certified complementary therapist currently heading Alleluia Reflexology health Solution and Nutrition staff.

He became involved in the Research industry from a young age and eventually opened a fully licensed research agency of his own called ASECODE, giving him the opportunity to associate with the people which, in turn, made him understanding and interested in other peoples cultures. It also gave him vast experience of dealing with and listening to people and their different needs.

He is the president of United Reflexology Association Uganda (URAU), Owner and founder of ASECODE and Alleluia Reflexology health Solution and Nutrition center. He has had a breadth of experience in 10years from the opening of the first Reflexology and massage center in Kampala Uganda, he has engaged in teaching reflexology, nutrition, massage and other therapies atcenter.

He enrolled: A Level 3 Diploma in Nutrition for Complimentary Therapies in 2014 at ITEC in Kenya approvedProfessor Gutu Catherine, A Level 3 Diploma in Reflexology at the ITEC School of Reflexology London in 2013 under the watchful eye of the highly acclaimed Principal Nyambula Austine and Professor Kamanu who taught him spinal reflexology and power reflexology as well as head massage. Diploma in complimentary therapies at Timeless Professional College Nairobi Kenya in 2012, Certificate for Gerontology in kiira care foundation in 2011, A Diploma in Nutrition Therapy, at Edrida Nutrition College in United Kingdom (UK) year 2010 approved By Professor Connie Bland. A Certificate in Gerontology (Elderly Health) in 2005, A Certificate in Herbal Medicine in 2008.

He also started his own practice working from three different locations as well as accommodating home visits in and around the north and central areas. His main attributes are that he is empathetic, approachable and non-judgmental. He is regarded as a good listener and has a great affection for people whether they are young or old. Goodrich has a love of travelling, skiing, nature, the theatre, his family and friends and other people’s wellbeing. He considers himself to be very spiritual and is a member of his local church.

Rejoice always, pray continually, give thanks in all circumstances; for this is God’s will for you in Christ Jesus.
1 Thessalonians 5:16-18